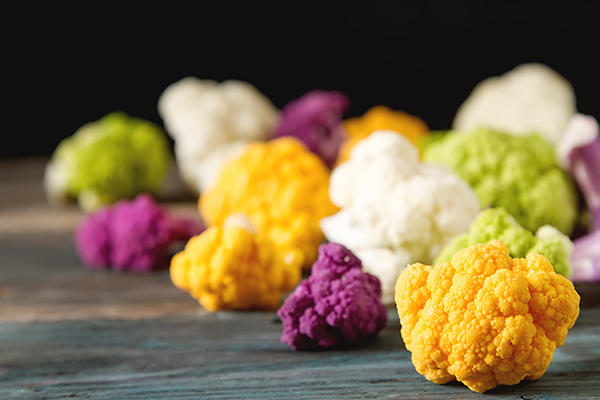 Cauliflower originates from the Brassica oleracea family that also contains broccoli, brussel sprouts, Kale and several other. It is an ancient vegetable that has been around since the 12th or 13th century. Native to the Mediterranean and Asia Its first documented location was Cyprus. From there is was documented in Italy and Rome along with its sister vegetable broccoli. Cauliflower became part of the European agricultural landscape in the 1600 and wasn’t used in formal dinners until the time of France’s King Louis XIV.

Cauliflower thrives in chilly weather hovering around the 60s. Its ideal climates are places like Northern China and Northern California where it is consistently cold and its peak season in the United States is Autumn. Although most of the hundreds of varieties of Cauliflower need to be grown in a chilly climate, there are some that are able to be grown in hot environments like India because the specific type has been in the region for so long.

Cauliflower grows in bushels roughly 8 inches across, with rough or bumpy looking white heads surrounded by leafy greens at the base. It resembles a white version of Broccoli and the green leaves at the bottom are not consumed as part of the vegetable.

When buying Cauliflower make sure the white heads are pure and creamy white. Any hint of brown or discoloration could mean the vegetable is beginning to rot. Although you don’t eat them, be sure to check the leaves and make sure they aren’t wilting. If they are, it is a sign that the plant has been out too long.

Cauliflower is widely known as one of the world’s healthiest foods and has been cited in its ability to reduce the risk of cancer. Cauliflower is high in Vitamin C and Vitamin K which promotes a healthy immune system along with hearth and bone health.

Cauliflower should always be refrigerated to retain freshness. After purchasing, be sure to place it in a plastic bag along with a paper towel in order to capture any excess moisture. 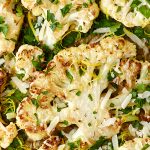 Cauliflower is a diverse vegetable and can be enjoyed for lunch, dinner, appetizers, and even snacks. A great recipe that can work for mid- afternoon snack or an appetizer for a light summer dinner is roasted garlic cauliflower. 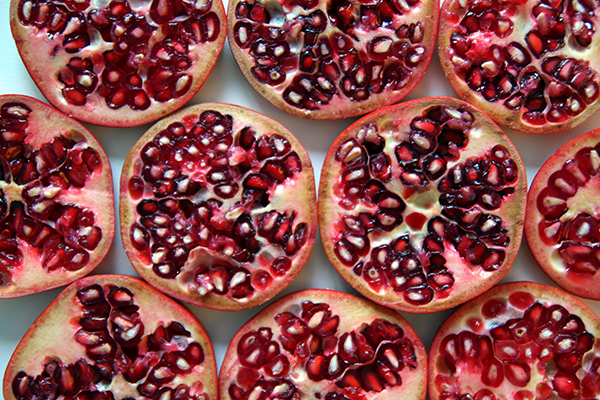