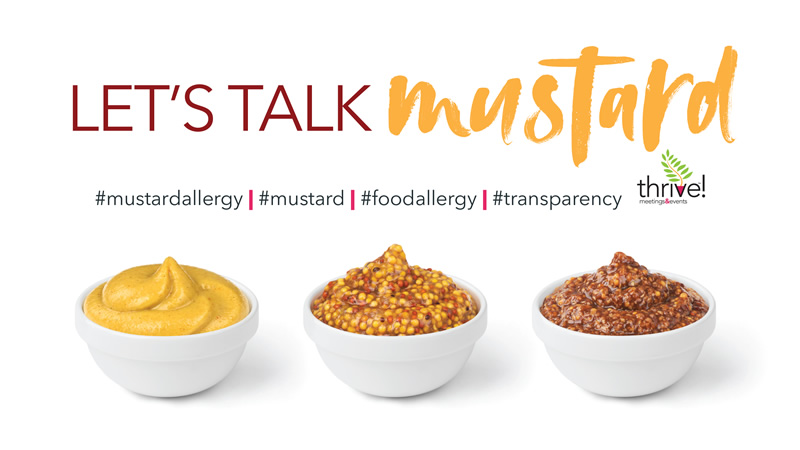 If you have to manage a food allergy or intolerance, traveling abroad or attending a business meeting or family picnic can be a minefield to navigate your allergy. From communicating your allergy in another language to knowing how that country, region or chef uses the food in their cuisine makes the already challenging situation even more difficult.

Peanuts, for example, are used in many restaurants and street food stalls in Thailand. Often, the nuts are ground down to use as a garnish, meaning it is impossible to guarantee meals prepared nearby are entirely nut free.

Mustard, an ancient flavor which can be traced back to Roman times, is typically thought of as a standard condiment or sauce to accompany a meal, but it is often found “hidden” in sauces, glazes, stews and dressings in French, Indian, German, English, Pakistani, Scandinavian, and American cuisine. While Italians rarely use mustard, it is a key ingredient in mostarda di frutta, a candied whole fruit pickled with mustard and usually served with boiled meats.

Mustard, along with peanuts, fish, tree nuts, soy, lupine and other allergenic food could cause severe medical consequences for some individuals when they are hidden in menu items, spices and more.

While mustard allergy is not particularly widespread, reactions that have occurred have been severe. So much so that Canada, the European Union and the GSO,* have named mustard as one of the top allergens in their countries, requiring it to be labeled on pre-packaged foods in each of the 36 countries, and unpackaged foods in the 28 EU countries.

Many people with a mustard allergy are also allergic to other flowering plants in the Brassicaceae (mustard) family — rapeseed, broccoli, cabbage, Brussels sprouts, cauliflower, turnips, kale, bok choy, and canola.

With many varieties — English, French, yellow, Dijon, whole grain, Habanero, honey mustard — and forms — dry, prepared, seeds, flowers, oils, leaves and cress — all of which are often used individually in cooking all over the world, mustard has a culinary fortitude.

The mustard’s spiciness depends on the seed used. This means, the more brown mustard seeds are used, the spicier the mustard.  There are  five basic types of mustard: mild, medium hot, hot, extra hot and sweet.  Ironically, w hen mustard is heated, it loses its spiciness. That’s why sauces have a more robust taste when mustard is added last.

Mustard is obtained using the seeds of mustard plants. The yellow flowering plants can produce up to 25,000 seeds ripening in pods. In this day and age, the plants are primarily cultivated in North America as well as in Southern Europe and the Mediterranean region. There are three different types of mustard which are named after the color of their seed: the mild yellow mustard seed, black mustard seed and brown mustard seed.

Mustard was one of the main crops in East Anglia and was cut by hand using scythes. The crop could grow up to six feet high, making this very strenuous work and requiring extremely sharp tools. When the scythes became blunt, they “would not cut the mustard”.

All derivatives can cause a reaction to those allergic to mustard. What’s more, all species of mustard contain the same risk, so it is recommended that they all be avoided.

Symptoms of a mustard allergy, like many other food allergies, can appear very quickly, certainly within a couple of hours.  Studies have shown that many people tend to have reactions on the more severe end of the scale — anaphylactic shock — so it is advised that those who suffer from these are routinely tested for an allergy to mustard.

As with many food allergies, the only way to avoid getting sick is to avoid mustard altogether, especially as it can creep into many innocuous foods and condiments including tomato ketchup, mayonnaise, processed meats, pickles, curry powders and marinades.

Do you know anyone who has a mustard allergy?

How to Live & Travel Confidently with Food Allergies