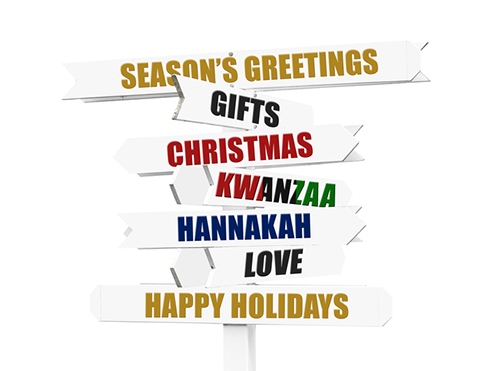 December and the winter season is a time for celebration! It’s a multicultural holiday season and as we design our menus and activities, we can consider the many opportunities we have for an especially inclusive feast. Here are several reasons we often say “Happy Holidays” as a greeting and farewell during this celebratory season.

In order according to the Gregorian calendar:

More than 1,300 years ago, the prophet Muhammad received the Muslims’ holy book, the Koran. Muslims show their love for the Koran and Allah by praying and fasting during the month of Ramadan. The dates of Ramadan change every year. In 2010 it was held in December. This year, 2016, it was June/July. By 2033, it will be January. Because it does occur the same time of the year as these other celebrations, it is an important celebration worth recognizing as you hold your multicultural feast each year.

A significant 22% of the world’s population observes Ramadan, making this an important calendar item for the meetings and events industry. Check out my primer on Ramadan and ways we can be aware and inclusive. There are also many foods to consider. I’ve outlined some traditional foods in my article earlier this year on fast-breaking-foods. An easy and delicious addition to the table might be dates and fruits served with honey. The sweets not only give an energy boost after fasting, but helps to keep the digestive system moving, something that can be a problem because fasting can slow the digestive tract. Add this to your multicultural holiday menu as a way to recognize a major religious festival.

Yule is also known as the Winter Solstice (Summer Solstice if you live in the Southern hemisphere). It’s the longest night of the year and the date varies year-to-year between December 20th to the 23rd. Historically, it was celebrated by Romans with a weeklong feast honoring the Sun God. It is better known for it’s connection to Germanic peoples, Celts, and anglo-saxons in general as a celebration to mark the rebirth of the sun. Now, Yule is celebrated by Pagans with festivals, food, the famous yule log.

There are many traditions surrounding such an old celebration and food is not lacking. Cookies, caraway cakes, meat dishes and wassail (a traditional alcoholic beverage) are all on the menu. For a great set of recipes, this site features a yuletide pork pie and is one of the best I could find with traditional and modern recipes, complete with main dishes, sides, drinks and desserts.

Over 2,000 years ago, Jewish people were forced to leave Jerusalem, their holy city. When they returned, they rebuilt their holy temple and the temple’s oil lamp, called a menorah. There was only enough oil for one day, but it burned for eight days, representing the miracle they celebrate today. Each night they light a candle to celebrate the eight day victory. Sometimes this is also called Chanukah or the festival of lights and while the date changes, it is celebrated between late November and early January.

There is a long list of wonderful holiday foods served on Hanukkah, but potato latkes are one of the most common. You are also sure to find brisket, short ribs, doughnuts, and noodle kugel listed among favorite traditional dishes. There are also variations and more modern dishes making their way to the feast. Cakes, cookies, meringues, savory applesauce, and hearty salmon variations are also popular foods. Whatever the choice, Kosher is the words that describes the rules and important practices regarding the type and preparation of foods.

Bodhi is the Buddhist holiday commemorating transcendence. It is the day Buddha, Siddhartha Gautama meditated until he found the root of all suffering and how to liberate oneself from it, which is considered enlightenment. It occurred in three stages, the cycle of rebirth where he discovered past lives, the law of Karma where he discovered the importance of living by a path (called the Eightfold Path), and the discovery of the four noble truths, which as considered Nirvana. Bodhi is observed on December 8th on the Gregorian calendar and in Japan, or the 8th day of the 12th month on Chinese lunar calendar.

Bodhi is signified by 12 days of celebrations. Services are held, meditation sessions are common, and some may decorate a Bodhi tree, which is the type of tree Buddha meditated under while on the path to enlightenment. Many celebrate with a traditional meal of rice and milk. Or cookies in the shape of the Bodhi tree are popular. Fig pudding is also a popular dish.

Christians celebrate the birth of Jesus 2,000 years ago in a stable. Believed to be the Son of God visited by three wise men on the night of his birth, December 25th, the holiday is marked by gift exchanges and family gatherings around food. There are variations around the world and linked holidays, such as Advent (a time of waiting) and the three kings day, to celebrate their visit.

A roast ham or turkey typifies the main course. Common side dishes include mashed potatoes, roasted carrots, spiced red cabbage, cranberry sauce, and more. Plum pudding or homemade custard are popular desserts. Because of the long-time global presence of the holiday, traditional recipes can range from old English standbys to Australian accompaniments, to modernized versions and completely new dishes. This classic menu can provide guidance on typical recipes.

Kwanzaa is Swahili, meaning “first fruits” in honor of the harvest and African culture. An activist, Maulana Karenga founded the holiday in 1966 to encourage learning and celebration around African heritage from December 26-January 1st. Some traditions include lighting seven candles for a seven day festival, representing seven principles: unity, self-determination, collective work and responsibility, cooperative economics, purpose, creativity, and faith. A common activity is to weave a placemat out of paper and place it at the table at the Kwanzaa feast. It is called a mkeka and represents a strong community foundation.

Food connects us to each other, to our past, and to our cultural heritage. The Karamu feast is held on December 31st and because the holiday is relatively new, it features a rich mix of traditional and modern dishes. Groundnut stew is considered a hallmark of West Africa. We often see southern influence, comfort foods, and even Creole influence.

Malanka is a traditional Russian, Ukrainian, Belarusian folk holiday. It is observed on the New Year’s Even of the Julian calendar, typically in early January. The story of the holiday is of the family of the Earth and the rebirth of Spring. Mother Earth was stolen by the Devil and so the Earth went without Spring until her return. The celebration of Malanka symbolizes the release and welcoming of an early Spring and is two days long.

Just a few of the traditions include cultural gatherings, pranks, games, polka dancing, and caroling. It may include carnival costumes, masks, parades, and other ceremonial festivities. Borshch is a popular Ukrainian dish that holds a longtime traditional place at events and observances. It is a traditional soup made of beet root and a variety of other ingredients. There are other staples such as dumplings, a sweet egg bread dish, or the traditional Ukrainian drink, Uzvar, which is a compote of dried fruits.

Whatever traditions, holidays, or observances you partake in each year, consider a menu that draws on several holidays, recognizing the multicultural holiday season. There are holidays based on religion, geographical region, national heritage, cultural background, and other observances. By implementing an inviting and inclusive menu, you’ll be sure to welcome all attendees to the table. 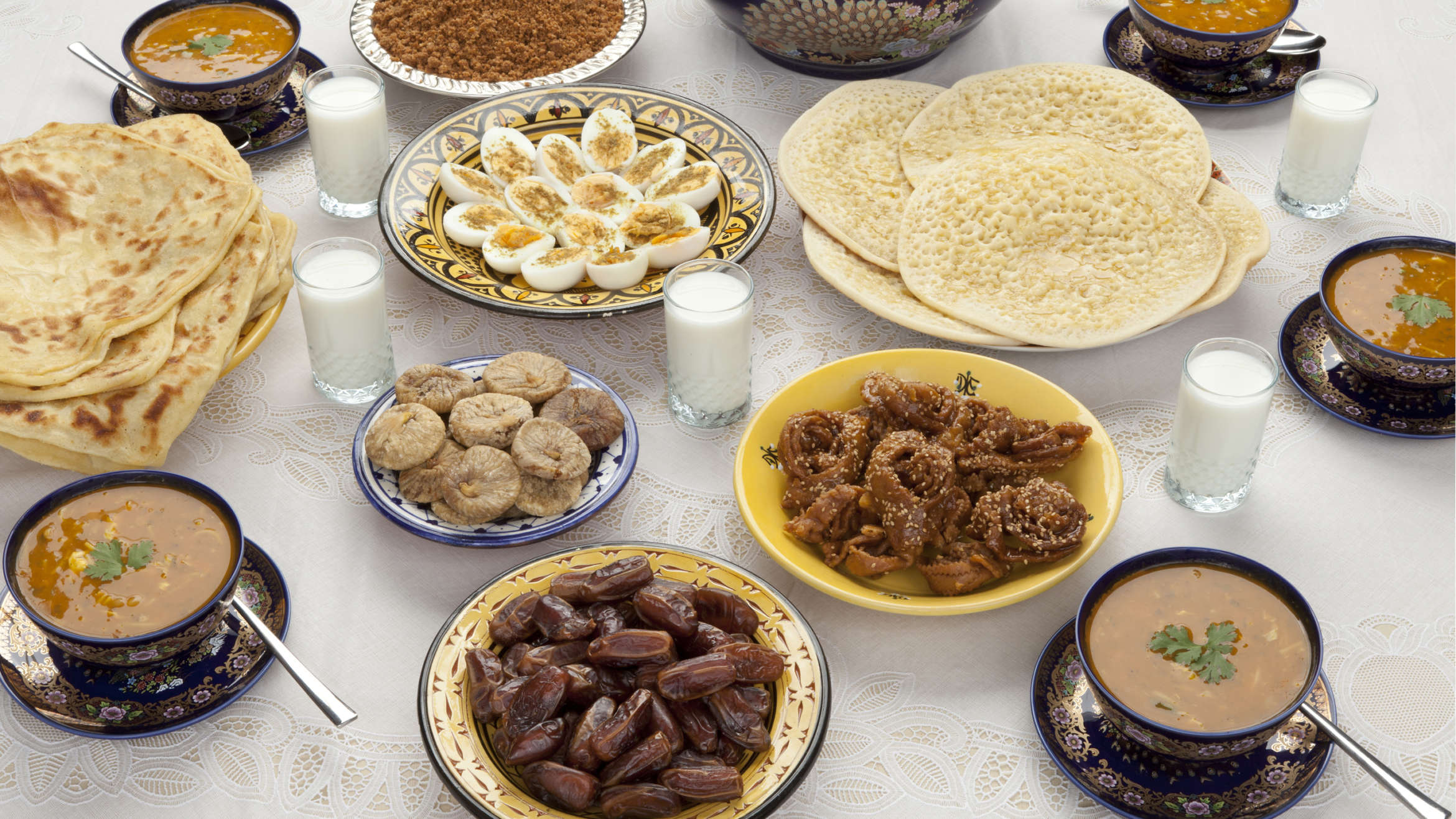