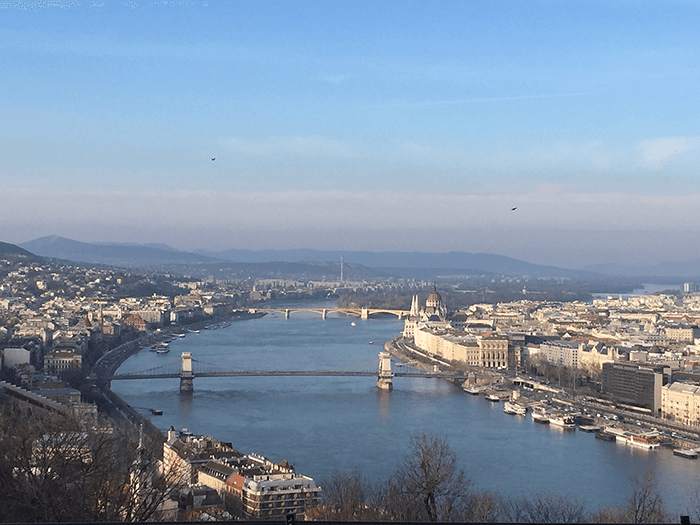 Earlier this month, after speaking at the MPI European Meetings & Events Congress in Krakow, Poland, I took the opportunity to visit Budapest, Hungary. Wow! I fell in love from the moment I saw the view above.

Taken from atop Gellért Hill, which was named after bishop Gellért who was thrown to death from the hill by pagans in the fight against Christianity, my guide Peter Gömöri, director of Welcome Touristic Budapest, said he wanted to give me the best panoramic view and of the city before we started touring the city. The Hill, along with the Banks of the Danube area, has been listed as a UNESCO world heritage site, since 1987. I can see why!

Budapest is Hungary’s capital and largest city, with a population of two million people. It is also one of the largest cities in the European Union.

As you can see above, winding through the picturesque city is the Danube, Europe’s second-longest river, located in Central and Eastern Europe that flows through 10 nations. On either side of the river are the two sides of the city — Buda, the old and historic part of the city lies on the west (left side) and Pest, the pulsing downtown and more modern side to the east.

What I found interesting is that Buda and Pest were originally two different cities — a 2,000 years old settlement bisected by the majestic Danube. The two cities were united as one on 17 November 1873.

Peter, a Hungarian by birth, has lived in a Budapest on and off throughout his life. He was a wonderful tour guide, explaining not only the history of Budapest and Hungary, but also providing me everything I would need to know as a meeting planner. One of our stops was a the Corinthia Hotel, one of more than 15 five-star hotels in the city. From its beautiful lobby and ornate meeting rooms, the hotel was spectacular. 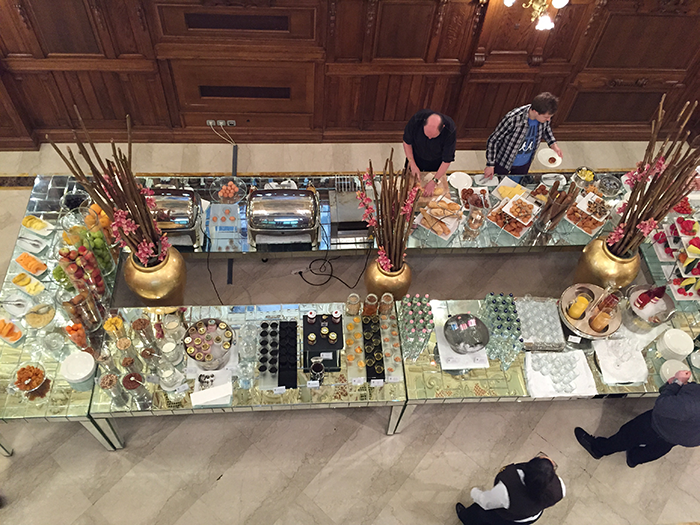 We ate at the Bock Bistro, one of the city’s best restaurants. Peter and I enjoyed goose liver paté, chicken soup with gizzards, steak with born marrow and ox cheeks. Not my typical lunch, but I was adventurous and pleasantly surprised. The waiter was also well-versed in the menu and both he and the chef discussed what I could eat. 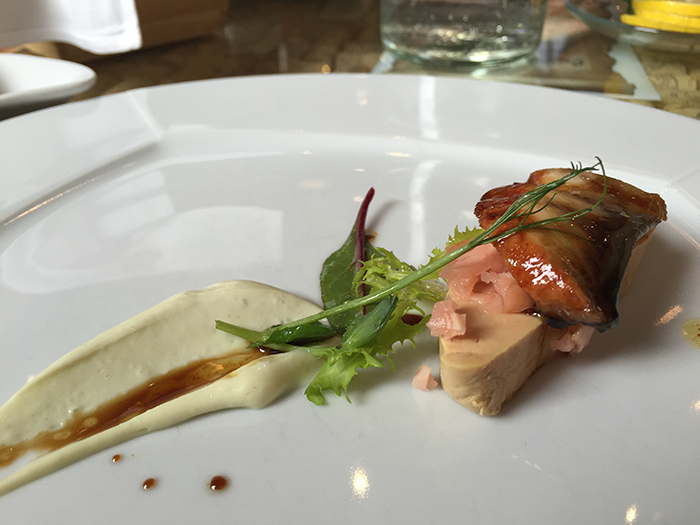 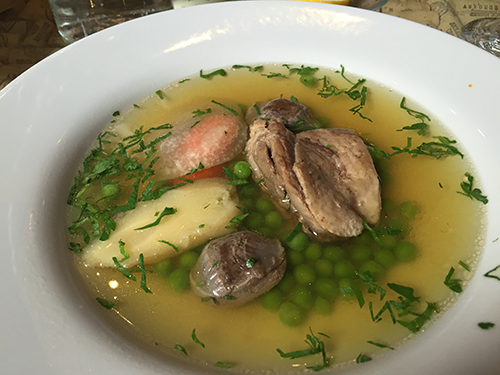 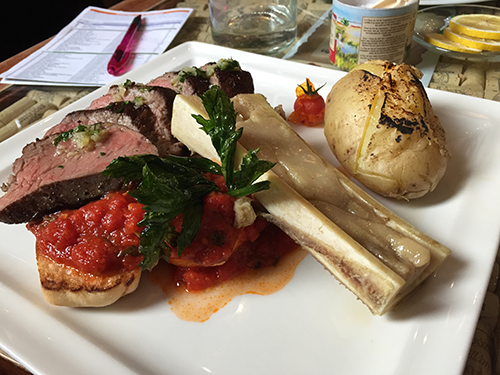 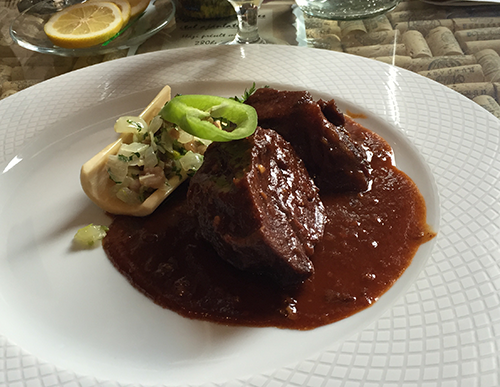 Next up on the tour, was meeting with the chef and general manager and tour of Gundel, Hungary’s leading restaurant for more than 100 years. The venue is spectacular, with the ornate decor, multiple room options and outdoor space. Since the European Union instituted the EU1169 law about labeling food allergens, just two months before my visit, I wanted to know what steps the restaurant was taking to implement the regulations and inform their customers about allergens.

The discussion was lengthy and good. Although they had not updated their menus to reflect coding for allergens, they said, they can accommodate the needs of any guest. Not as comforting or reaffirming on the law, as I would have liked to have heard, I have to give them time to get more direction from the Hungarian National Food Chain Safety Office on implementation requirements. 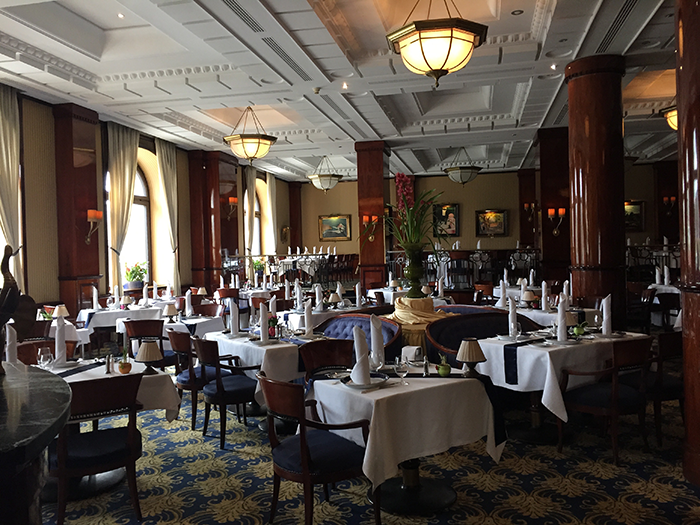 Between dining and self-guided tours of the Four Seasons and Boscolo Hotel, Peter took me sight-seeing.

One of Budapest’s nicknames is the City of Spas or City of Baths because it has so many natural warm spring waters under the city, providing for centuries, baths and curative spas to offer services.  The more than dozen baths across the city is one of the top reasons Budapest is visited by travelers worldwide. Szechenyi Baths, picture below, is one of the most famous, as it is visited by more than one million bathers annually. 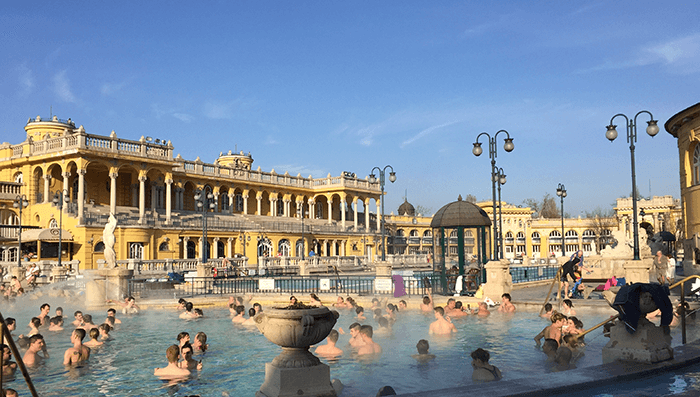 Adjacent to the Szechenyi Baths in City Park is The Heroes’ Square and the millennium monument pictured below, which was built in 1896 to commemorate the 1,000th anniversary of the arrival of Hungarians in the Carpathian Basin. The monument’s design consists of two semi-circles on the top of which the symbols of War and Peace, Work and Welfare, Knowledge and Glory can be seen. Standing 36 metres high in the center of Heros’ Square is a corinthian column with the statue of Archangel Gabriel on the top, the symbol of the Roman Catholic religion.

On the other side of the Danube, on the Buda side of the city is Buda Castle, the historical castle and palace complex of the Hungarian kings in Budapest. Once called the Royal Palace and Royal Castle, as it was the first royal residence after the Mongolian invasion, the Buda Castle was first completed in 1265. It was completely destroyed in 1686 when liberating when liberating Buda from the Turks. The Castle was rebuilt through several centuries and finally finished in 1904. In World War II, it was badly damaged again and rebuilt once again. Today, Buda Castle houses the Budapest History Museum, the Hungarian National Gallery and the National Library. You can also find the Lion Courtyard; the Matthias Well, a bronze statue of King Matthias; and the statue of the Turul Bird, the mythological bird of the Magyars.

One of the other absolutely amazing buildings in Budapest is the Budapest Parliament, the third largest parliament building in the world. With 691 rooms, 125 miles of stairs and standing at 315 feet tall, the Parliament is the same height as the St. Stephen’s Basilica, the largest church in Budapest. 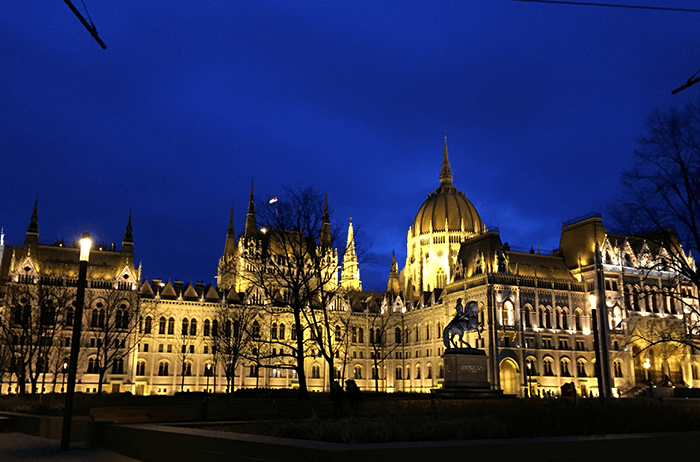 My tour to Budapest was well worth it the “cost of admission.” I cannot thank Peter enough for hosting me for two days and sharing his pride and love for his home. This city should be a definite location for an incentive trip or meeting.

Have you been to Budapest? Was it for business or pleasure. Would love to hear about your meetings and incentives trips to the city. 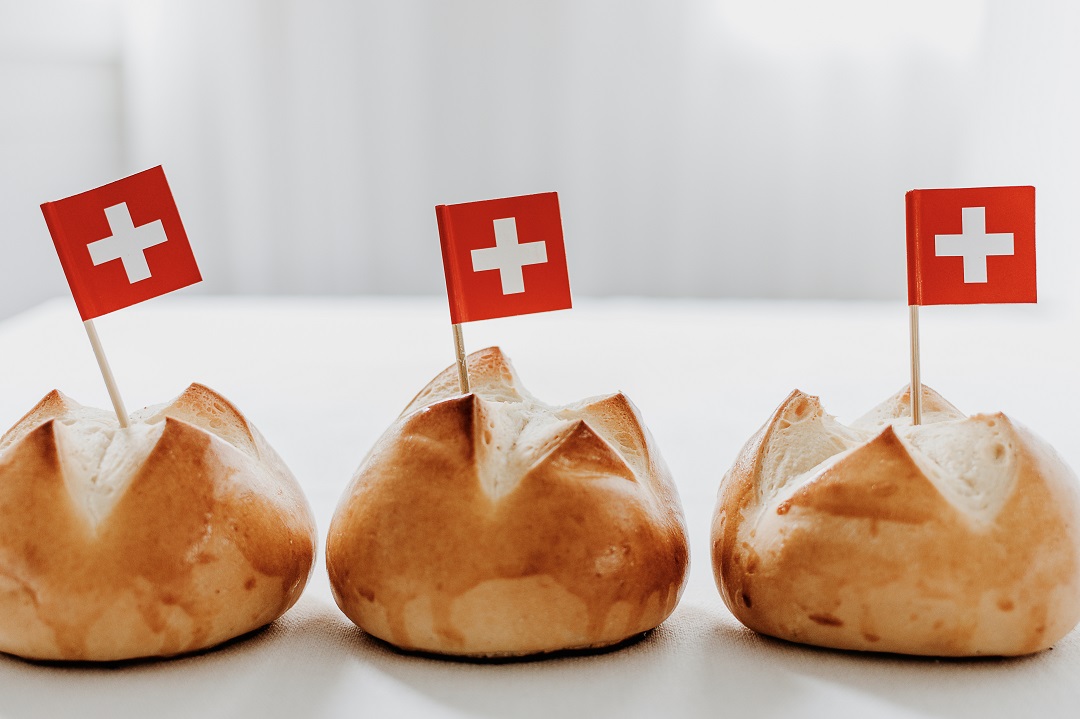 Around the World in 8 Independence Days