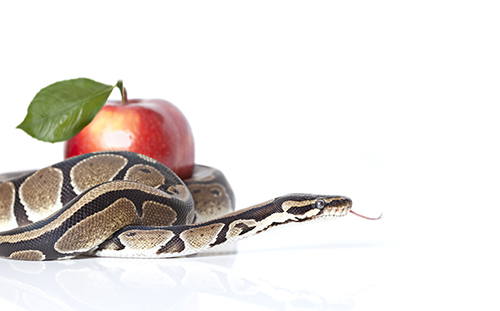 While I’ve known others with an apple allergy, Leticia’s is the most severe I’ve encountered. As she explained in her registration form, she is “highly, deathly allergic” to apples, “both ingested and inhaled from others eating nearby.”

This was vital information to know about her, since I was analyzing and coding catering menus to identify allergens and other dietary needs for SPINCon, a conference she had registered to attend.

Of the 150 participants attending the conference, 21 percent of them had a special dietary need. Their needs ran the gamut: lactose intolerance, both religious and personal preferences not to eat beef or pork, celiac disease, veganism and allergies to foods including MSG, avocado, almonds, shellfish and apples.

“highly, deathly allergic” to apples,
“both ingested and inhaled from
others eating nearby.”

When I saw Leticia’s registration note about her apple allergy, I asked the SPINCon event team if we could make the event completely apple-free. My question was answered with a resounding yes.

Here is how we provided a safe and inclusive environment for all, including Leticia. 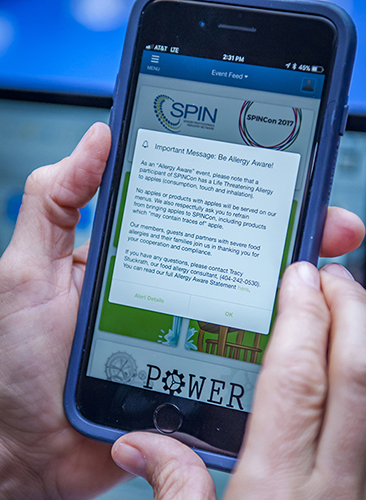 We wrote a statement to spread the word that SPINCon was an allergy-aware event and that we were working with our catering partners to ensure safe and delicious meals for everyone to eat, no matter the need. We also emphasized the critical importance of removing apples from the entire event, even asking guests to refrain from bringing apples into shared space.

Distributed and announced the allergy-aware statement

Once the statement was created, we needed to let all attendees and the hotel catering teams know that SPINCon was an allergy-aware event and that we needed them to follow the new policy.

Before we disseminated the statement, though, I wanted to let Leticia know what we were doing and to make sure she was OK with it. Her reply: “You have no idea the blessing you have given me this morning. Reading this brings me tears. I hate this allergy more than anyone could know and almost dying a year ago because I ate a banana that had been placed in a bowl where apples had been really has me in a prayerful state for attending events. I have no words that could show enough gratefulness.”

SPINCon sent the message out to all attendees a few days before the event via an email. Then, Jeannie Power of Power Events Group, who sponsors and produces the SPINCon event app, helped us get the information out via the app by:

One final announcement was made in the opening general session. While a slide with three apples was shown on the screen, the emcee announced that the event was apple-free (“The only apples allowed in the event space are iPhones,” he said) and asked everyone if we were OK with the “rules.”

Worked with catering partners to remove apples from
all menus

As mentioned above, I analyzed all of the catering menus for the event, noting any obvious allergens and asking chefs about hidden allergens, and coding them for the special diets they met, such as vegan or gluten-free.

I sent the catering managers my notes and asked the chefs to review them and to add any additional information that I could not determine just from reading the name of each dish. 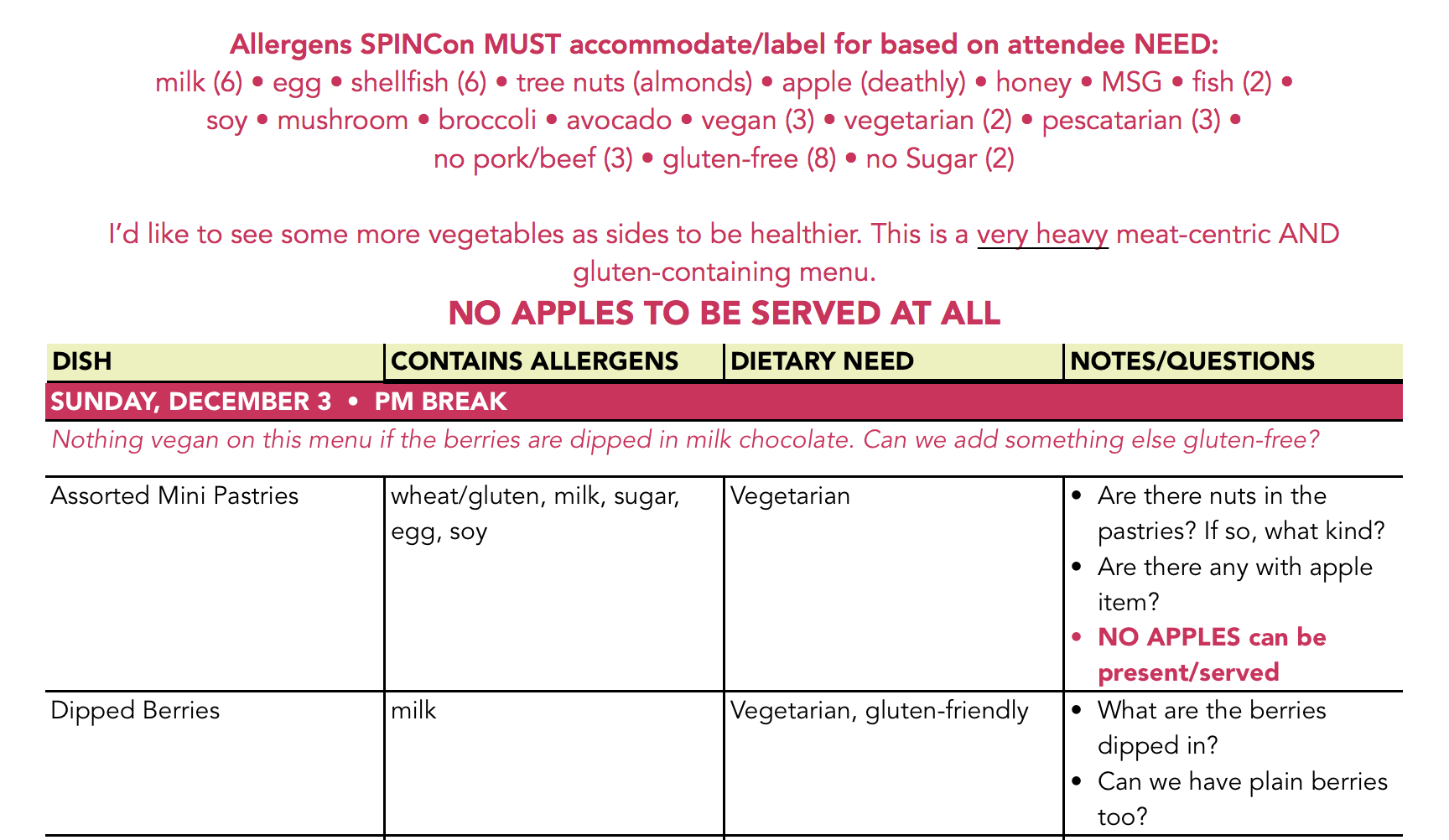 When on site, I sat down with the chef to go over the menus again, line by line, to confirm ingredients and buffet labels. This was especially valuable as we uncovered hidden apples, MSG and gluten in several of the sauces being served. “For example, one of the hotel’s barbecue sauce contained apple cider vinegar.”

Labeled all buffet items with allergens and dietary needs

Once we had an accurate identification of allergens (top eight and those noted by attendees) in the food as well as the other dietary needs each dish met, we created buffet labels to place in front of each item.

While I created the ones for the main hotel, the second hotel’s catering department said they would make their own labels for the buffets. Upon arrival, we noticed the labels had icons on them that hotel staff had designed. Not only were the icons small and somewhat hard to read in a room where the lights would be dimmed, but the hotel had created a new method of non-intuitive communication in the middle of an event.

Don’t get me wrong: I am all for icons if they are clear, bold and introduced  with an icon key at the start of an event. These, however, might have been confusing to attendees. Thankfully, the hotel staff understood our concerns and were able to quickly switch out the icons for words. 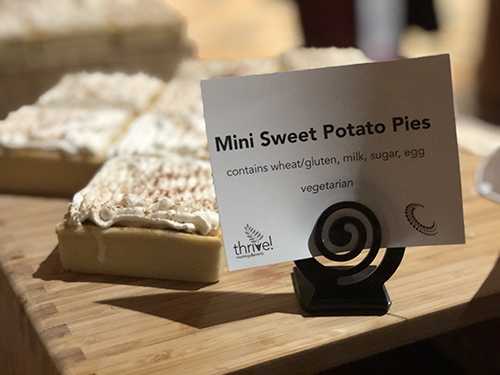 Hosting a conference of any size is not easy. Eliminating apples—or any food, for that matter—from eight catered events AND asking event participants to not bring any apples into the event space was a major challenge, though well worth it.

While there were some minor hiccups in the process, and one participant vehemently complained to me about the policy, I knew we did the right thing. SPINCon is a safe haven for learning, connecting and being your authentic self. Our allergy-aware policy offered Leticia and everyone else with a dietary need an opportunity to safely participate in an event they may have otherwise avoided. 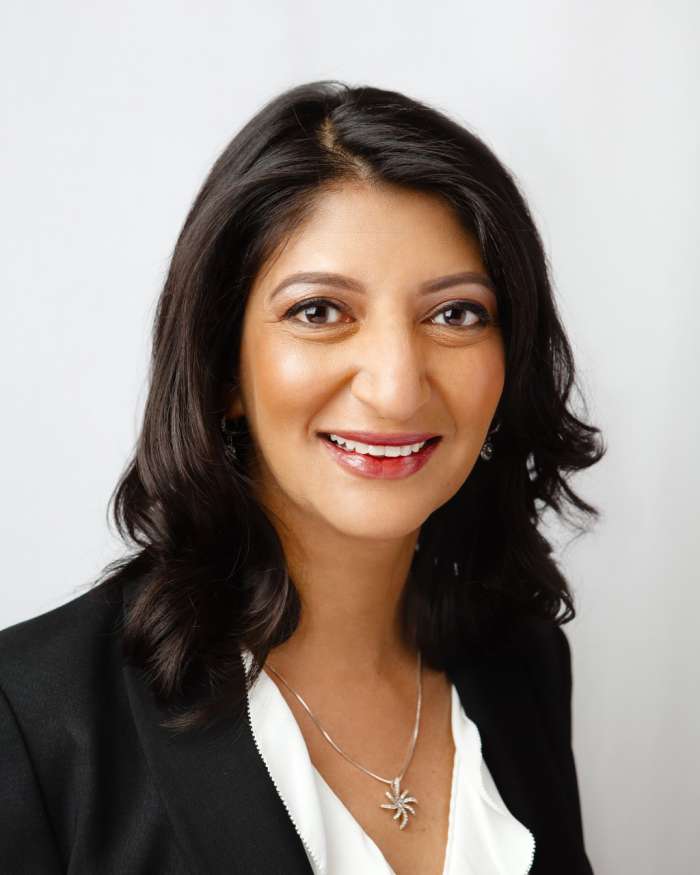